Which indicator are you trading with in IQ Option? If you use RSI, what do you rely on to open an order? Most traders open orders when the RSI enters the overbought or oversold zones. But the RSI indicator has another extremely effective trading strategy which is the RSI divergence. In this article, I will show you how to open safe transactions with the RSI bullish and bearish divergence to earn $180 within a week.

Opening long-term order will be better

It is still the same thing repeated. But when trading, traders mostly ignore this way of keeping money. In a short time, no indicator or price pattern could predict price movements. When opening orders under 5 minutes, the risk of an emotional explosion is very high.

So the advice from traders who have made money is to open an order that is longer than 10 minutes (the expiration time is over 10 minutes).

The RSI divergence is quite special so the appearance is also very little within a day over an asset. You can apply RSI divergence trading strategy for most types of assets in the IQ Option portfolio. And when it appears, your job is simply to open an order, then shut down the computer and do other things.

Waiting for trading results mostly yields negative feelings. Once you have opened an order, let the market decide once the time expires. Observing an opened order is redundant. It brings no advantage in trading.

How to trade using the RSI divergence trading strategy

Open a HIGHER order when the price is in a downtrend, but the RSI is up. Bullish divergence appears, predicting the weakening of prices. A reversal may occur from down to up.

Open a LOWER order when the price is in an uptrend, but the RSI is down. The bearish divergence appears, signaling a reverse from up to down.

1st order: The price was forming an uptrend, creating higher peaks after peaks. But the RSI created a bearish divergence, which showed that the strength of the buyers had weakened. And when the bearish divergence appeared, it was also the time for us to open LOWER orders safely.

2nd order: The price broke out of the previous support zone and then continued to make a lower trough. But the RSI created a bullish divergence, signaling the end of the decline. The price was expected to increase in the near time.

3rd order: The trend was down. The following peaks and troughs were higher than the previous ones respectively. The RSI bullish divergence appeared, signaling that the downtrend had come to its end. The probability of price reversing from decreasing to increasing is very high in the near future.

Opened a 35-minute HIGHER order: when the bullish divergence appeared.

4th order: The trend was down. Consecutive bearish candlesticks appeared making the price go lower. When the RSI divergence appeared, the traders knew that the decline had been over. Most traders will open HIGHER orders when they receive a signal from this indicator.

5th order: Prices were rising sharply and urgently. Often, such price behaviors are not stable in the long run. When prices are showing signs of exhausted, traders also make reasonable reversal trades. And when the RSI bearish divergence appears, it reinforces the certainty that the price will reverse in the near future.

Opened a 35-minute LOWER order: when the bearish divergence appeared.

The trend will stabilize over time. That is the secret for us to make money from the market. Get rid of fast-living or quick-living habits from now on. Things that come fast will go away very quickly and profits are no exception. Maybe in a short time, you can double or triple your balance but you can also lose within a few hours. Successful traders are people who aim for steady and stable profits over time. 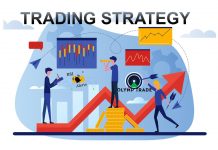 How To Trade Effectively With RSI Divergence In Olymp Trade