Today, How to trade blog will introduce to you the Bearish Harami candlestick pattern. This is a good signal for orders following the downtrend. This article will provide all the best knowledge about this special candlestick pattern. How to use it in transactions so that it is most effective.

Video on how to identify and use Bearish Harami candlestick pattern

What is a Bearish Harami candlestick pattern?

These two candlestick patterns are very good, highly accurate signal pairs. Traders always give an eye on them when they appear on the price chart.

On the Japanese candlestick price chart: It usually appears at the end of uptrends and predicts a future price decline. The pattern which has a larger amplitude will give a more accurate bearish signal.

Sometimes, the Bearish Harami candlestick pattern appears in a downtrend. This is a signal for the continuation of the downtrend.

Compared to its standard pattern, the variant one has a slightly different structure. The second candlestick is a Spinning Top or Pin Bar. This variant candlestick pattern is also a very noticeable signal of experienced traders when it appears.

Combining the 2 candles of the Bearish Harami, you will get a Bearish Pin Bar (aka Shooting Star). These are popular candlesticks signaling bearish trends. This explains why it often appears at the end of an uptrend and is a signal of price reversal from up to down.

How to trade binary options with this candlestick pattern

Bearish Harami is a special candlestick pattern, which is the beginning of major price drops. Traders consider this candle pattern as confirmation points to open DOWN orders. To get the most out of this candlestick pattern, traders often combine it with trend indicators. Let’s take a look at some of the following effective combinations.

Notes: This is a bearish reversal pattern. So when using it, you can only open DOWN orders following the prediction of the pattern only.

Strategy 1. In combination with RSI indicator

RSI indicator is a very good price trend analysis indicator. When the RSI is in the overbought zone, the price tends to fall. Combined with the appearance of the Bearish Harami pattern, this will be a very good entry signal for you to make a profit.

+ Open a DOWN option when the RSI indicator is in the oversold zone, and our candlestick pattern appears.

Strategy 2. In combination with Resistance

The resistance is the zone where when the price touches, it will likely turn back down. If the price is forming a Bearish Harami pattern, it will likely decrease. You can then open DOWN orders according to this signal.

Conditions: The 5-minute Japanese candlestick chart, resistance zone. The expiration time of 15 minutes or above.

How to open an order:

+ Open a DOWN order when the price touches the resistance and our candlestick pattern appears.

Notes when using the pattern in binary options trading

This is a very popular candlestick pattern for traders to follow the trend. Familiarize yourself on a DEMO account with this special signal to better understand it. I wish you successful transactions. 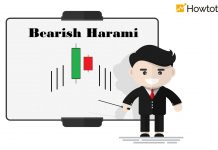 How To Trade Forex Effectively With Bearish Harami Candlestick Pattern Top 4 Candlestick Patterns With The Highest Probability In Olymp Trade 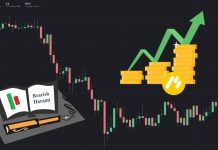 How To Make $100 In Binomo With Bearish Harami Candlestick Pattern