Some candlesticks have small bodies, but the upper or lower shadow is unusually long. When they appear on the candlestick chart, they will attract attention because of the difference. So, experienced traders use it as a signal to enter secure transactions. In this article, I will introduce what a Doji candlestick is. What is the meaning and how to use it in binary options trading?

A video introduces how to identify and use Doji candlestick

What is Doji Candlestick?

Doji is a special signal pattern that is easy to identify when using Japanese candlestick charts to forecast and analyze prices.

Doji Star: This is a standard Doji candle with the same closing and opening prices. The upper and lower tails of the candle are of normal length.

Long-legged Doji: This is a Doji which has an upper and lower tail that is longer than the standard candlestick.

Dragonfly Doji: This is a Doji candlestick with a very long lower tail, but (almost) without an upper tail. Opening price = Closing price = Highest price. Looking at the Japanese candle chart, it is very much like a dragonfly.

Gravestone Doji: This is a Doji candlestick with a very long upper tail, but (almost) without a lower tail. Opening price = Closing price = Lowest price. This candle pattern looks similar to a gravestone.

Meaning of the Doji candlestick pattern

Doji Star: It shows the indecision of the market. The opening price is equal to the closing price which lies in the middle of the candlestick. And when the price hesitates, it’s time for you to observe.

Dragonfly Doji: This is one of the candle patterns that shows the determination of the market. In the beginning, the market drops sharply, but it increases decisively after that. This candlestick usually appears at the bottom of the market.

Gravestone Doji: It’s completely opposite to the Dragonfly Doji. The price increases sharply during the first stage but then falls decisively in the later stage. This is a candlestick pattern that usually appears at the top of the market.

How to trade binary options with Doji candlesticks

When a Doji candlestick pattern appears after an up or downtrend in the market, it will reflect the slowdown of that trend.

In other words, when the Doji candle pattern appears, it shows the balance between supply and demand of the market. After the Doji is broken, the market may reverse or resume the previous trend.

Open an UP option: The Doji candle appears. The price touches the support level.

Open a DOWN option: The Doji candlestick forms right at the resistance level.

Dragonfly Doji and the support level

Open an UP option: The Dragonfly Doji touches the support zone.

Gravestone Doji and the resistance level

Open a DOWN option: The Gravestone Doji candle touches the resistance zone.

Things to keep in mind when trading with Doji candlestick

– A Doji candlestick appears at a lonely peak. It means there are gaps before and after it. Then, it will be a sign of a reversal with high precision.

– To increase safety when trading Binary Options, you should combine Doji candlesticks with other indicators.

This article may help you gain more knowledge about Doji candlesticks. However, to make perfect transactions, you should trade and practice it on a Demo account. If there is a steady winning rate for several consecutive weeks on the Demo account then you can start trading with real money. 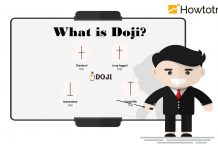 Doji Candlestick And How To Use It In Forex Most Effectively