What is Three Inside Down candlestick pattern?

In trading, using this reliable price signal effectively will help you with safe DOWN orders.

Structure of Three Inside Down candlestick pattern

The standard pattern consists of 3 candles.

The variant candlestick patterns of Three Inside Down are also carefully considered when analyzing the price chart. Each variant has a different shape. Depending on the second candle in the pattern, we have the following variants of candlestick patterns:

(A) Three Inside Down pattern with the first two candles forming a Bearish Harami candlestick pattern.

(B) The pattern of which the second candle is a Pin Bar.

(C) The pattern of which the first 2 candles forming a Dark Cloud Cover candlestick pattern.

Three Inside Down is a special candle pattern that signals a price reversal from up to down. This price signal often appears at the end of an uptrend and signals future price declines. Let’s take a look at some of the appearance of this candle pattern on the Japanese candlestick price chart.

Three Inside Down meaning

How to use Three Inside Down candles in Binary Options

This will guide you to use this special candlestick pattern to open binary options most optimally. The best way to use it is to combine the candlestick pattern with trend indicators. At that time, the entry signal is when the Three Inside Down candles appear.

Notes: This pattern is a reversal bearish signal. So when using it, you can only open DOWN options.

Support/Resistance is always the top priority indicator in trading because of its accuracy. With this combination, when the price increases and touches the resistance level, it will probably decline. If the price creates a Three Inside Down pattern here, it notifies traders that the price will actually decrease. You can completely open a DOWN option right now.

Conditions: A 5-minute Japanese candlestick chart. The expiration time must be 15 minutes or more.

How to open an option

+ Open a DOWN option when the price touches the Support zone, forming a Three Inside Down pattern.

SMA30 is a great indicator of price trend analysis. In this strategy, when the SMA30 points down, the market is in a downtrend. The pattern is now an entry signal for opening DOWN orders.

Conditions: A 5-minute Japanese candle chart, SMA30 indicator. The expiration time must be 15 minutes or more.

How to open an option

+ Open a DOWN option when the SMA30 points down. The price is below the SMA30 and forms a Three Inside Down pattern. 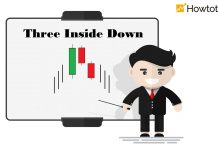 Three Inside Down Candlestick Pattern: Meaning And How To Trade Efficiently