You may have had the opportunity to observe successful traders specializing in long-term order in Binary Options trading. Most of them rely on a long curve on the Japanese candlestick chart to open orders. That is the SMA indicator aka SMA line.

Speaking of which, many people wonder why it is so simple. Is it so simple to open an order? And how do we open an order? This article will guide you in detail on how to use and trade binary options with the SMA indicator.

Video on how to use SMA indicator for long-term trading

SMA is a simple moving average. It is considered by trend traders as an indispensable support tool. SMA is a type of analytical indicator that relies on past price movements to forecast future trend movements.

How does SMA indicator work?

SMA is the simplest moving average. It is the average of closing prices over a given period of time.

For example, SMA (50) means the moving average of the 50 candles on the closing price of the previous 50 candlesticks.

How to use SMA indicator

The SMA helps investors find out future price trends. Therefore, it helps us predict future prices. Looking at the slope of the SMA, you can guess how the price will change to make the best decision.

Bullish trend when: The 5-minute Japanese candle chart is above the SMA30 line.

Bearish trend when: The 5-minute Japanese candle chart is below the SMA30 line.

SMA10 is an indicator that captures price movement in the short term. Beside, SMA30 is used by traders to forecast the upcoming mid-term trend. And combining the two SMA lines together, we will get a safe entry point according to the price movement when they intersect.

Open an UP order when: The SMA10 crosses the SMA30 line from below.

Open a DOWN order when: The SMA10 crosses the SMA30 line from above.

How to trade binary options with SMA indicator

SMA is a highly effective indicator when used in long-term transactions. However, to have more safe entry conditions as well as increase the accuracy of trend prediction, it is best to incorporate basic indicators or a reliable candlestick pattern.

Combine with Support and Resistance

Conditions: A 5-minute Japanese candlestick chart. The expiration time of 15 minutes to 30 minutes.

How to open an order

Open an UP order when: The price goes up from below the SMA30 line to break out of the resistance successfully.

Open a DOWN order when: The price goes down from above the SMA30 line to fall out of the support.

The SMA30 indicator is for determining the current market trend. And the continuation candlestick patterns will be the signals to open an effective order. This is the perfect combination to make a decision to open a trade with a high winning rate.

Conditions: A 5-minute Japanese candlestick chart. The expiration time of 15 minutes to 30 minutes.

Explanation: When the candlestick chart is completely below the SMA30, a downtrend appears. We can consider SMA30 as a resistance line in a downtrend. And the appearance of a bearish continuation candlestick pattern will give us an entry signal. This is an effective way of opening a DOWN order, preferred by experienced traders.

Open an UP order when: The Japanese candlestick pattern continues the uptrend (Hammer, Bullish Harami, Morning Star) formed below the SMA30 line.

Notes when using the SMA indicator in binary options trading

Advantages: The SMA line is slow to respond so it eliminates short-term turbulent fluctuations. In the long term, the SMA is quite reliable. A notable practical characteristic of the SMA is: because SMA is the most popular moving average on the market, it reflects quite closely to the psychology of investors at the support or resistance levels.

Disadvantages: On the contrary, clearly showing in the short term, the SMA line is slow to react, so it offers entry signals very slowly. Therefore, the sensitivity of the SMA is relatively low compared to short-term fluctuations.

To overcome disadvantages and optimize efficiency when using SMA, you should open long-term orders. 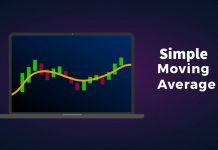 What Is SMA Indicator? How To Trade Forex With SMA 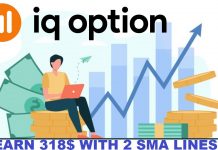 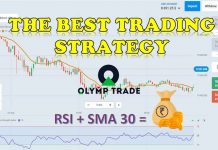 How to Trade Effectively With RSI & SMA Indicator In Olymp Trade